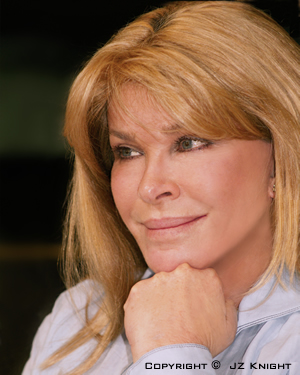 JZ Knight is the founder of Ramtha’s School of Enlightenment, the president of JZK, Inc., and the chairman of JZ Knight Humanities Foundation. She is the sole channeler for Ramtha.

Ms. Knight is considered by many religious historians to be an icon of American New Age Doctrine and one of the most charismatic and controversial spiritual leaders in America.

1946: JZ is born on March 16 in Roswell, New Mexico, to Charles and Helen Hampton, migrant farmworkers living in Hagerman, New Mexico. Her mother names her Judith “Judy” Darlene Hampton after Judith, the heroine of the Book of Judith. She is the eighth child born to the impoverished Hamptons.

1946-1964: Soon after her birth, the family moves to Rockwall, Texas, to work cotton fields owned by large landowners in the area. Her first spiritual experiences begin to have an influence on her character. When Judy is five years old, her mother moves the younger children to Artesia, New Mexico, leaving behind her abusive and alcoholic husband. Judy begins her education in the local schools, and with the marriage of her mother to a local businessman, Bill Angley, the family becomes stable. Judy graduates from Artesia High School in 1964.

1965-1976: An unsuccessful attempt to attend college in 1965 leads to her first marriage and the birth of her two children, Brandy and Christopher. The marriage ends in 1969 and Judy moves her small family to Roswell, New Mexico. Without child support but empowered by her strong faith in God, Judy begins her business career in cable television as the sole provider for her children, eventually moving to California. Judy gains the nickname of “Zebra” due to her ability to make black-and-white decisions. (This nickname was later to be abbreviated into the familiar “JZ.”) Working her way up the corporate ladder, JZ becomes an extremely successful businesswoman. After landing cable television contracts in Bremerton, Seattle, and Tacoma, JZ moves to the Puget Sound area of Washington State, where she remarries and settles in Tacoma.

February 1977: On Sunday afternoon of February 20, JZ has her first encounter with an extraordinary being in her Tacoma kitchen. The being is Ramtha.

1978-1979: In November of 1978, Ramtha first channels through JZ. (“Channel” is a term coined by Ramtha and made popular by his teachings throughout the 1980s. A description of the process follows below.) JZ Knight holds sessions with Ramtha. She initiates nationwide forums called “Dialogues.” Thus begins a long and enigmatic relationship where the very physical JZ and the spiritual being, Ramtha, combine to bring a message of human divinity to the world.

1980-1987: JZ appears on numerous national television programs, accomplishes a partial world tour with Ramtha and his teachings, and tours nationally to promote her autobiography, A State of Mind: My Story, published by Warner books in 1987.

May 1988: At Ramtha’s request, JZ founds Ramtha’s School of Enlightenment, the American Gnostic School. The school is started May 22-28 in Snow Mountain, Colorado, with 532 attendees. Ramtha introduces a dynamic breath technique called Consciousness & Energy®. He also introduces quantum physics to the students, initiating what is later to become a synthesis of science and spirituality.

1988-1991: Weekend and weeklong workshops and retreats enable students to integrate philosophical teachings with personal experiences. Ramtha introduces new disciplines and provides hands-on training for such mind-over-matter techniques as remote-viewing, Fieldwork®, and The Tank®.

1992-1993: Controversy about the school swirls in a media maelstrom due to the divorce case between JZ Knight and her ex-husband, Jeffrey Knight. All accusations advanced by Jeff Knight of cult activity, brainwashing, and mind control are tossed out by Pierce County Superior Court Judge Bruce Cohoe. However, the judge awards Mr. Knight $750,000 based on the fact that at the time of the original divorce agreement, neither party had considered the goodwill value of JZ’s organization. The Washington State Court of Appeals later reverses this decision.

1996-1997: JZ agrees to have the teachings studied by scholars over the course of two years, culminating in a conference held February 8-9, 1997. Among the results are that JZ Knight and the students display a marked growth in their spiritual and mental abilities. Ramtha’s School of Enlightenment enjoys a new level of acceptance in academic circles and with the general public, largely due to JZ’s perseverance and her twenty-year history with Ramtha.

1997: The Austrian Supreme Court rules that JZ Knight is the only person allowed to channel Ramtha. In 1992, Julie Ravell, a Berlin woman, claimed to be the true channel for Ramtha. She held seminars in Germany, Austria, and Switzerland, resulting in multiple instances of trademark infringement. JZ Knight, in her desire to keep the teachings of Ramtha pure, brings a lawsuit against Ravell. In 1995, an appellate court in Linz, Austria, orders Ravell to stop using Ramtha’s name in conjunction with her channeling sessions and to pay JZ’s court costs. Ravell appeals to the Austrian Supreme Court but the Court upholds the appellate court’s rulings.

1999-2011: Ramtha’s School of Enlightenment embarks on a six-continent world tour. In questionnaires given to students from the 2000 and 2001 world tour events, 84 to 90 percent of the new students that attended the first level training of the school reported that the Beginning Retreat was “the greatest week of their life, so far.”

Ramtha coined the term “channel.” His popularity in the 1980s rapidly led to the broad use of the term. Before that, an individual involved in communication with etheric entities was called a “trance medium” or a “sensitive.” Many people who claimed to go into a trance to communicate with spirits were reporting valid experiences. But JZ’s process is different. Ramtha calls her a pure channel, which is very rare. She actually leaves her body and experiences rushing down a long tunnel to a brilliant light, not unlike the near-death experiences that have been reported by people who have been declared clinically and legally dead but have returned to their bodies. Ramtha surrounds her body and operates her body through the brainstem and lower cerebellum. Thus he can make it move, talk, and interact with the environment.

JZ’s essence or Spirit is not present when channeling. She is not in a trance nor does she remember anything that occurs while she is out of her body. Ramtha controls her body by using her brain. Although the term channel has now been adopted by many people to describe what they do, it is usually not so. The remarkable results of the physiological testing JZ underwent during the research study in 1996 provided a standard from which scientists are able to distinguish the process of channeling from mediumship, trance, or other states of consciousness.

Is there proof of Ramtha’s existence independent of JZ Knight?

In 1996, a distinguished panel of twelve scholars — including scientists, psychologists, sociologists, and religious experts from the Chicago Theological Seminary, Temple University, Colgate University, University of California, University of Oregon, and Birbeck College at the University of London — studied JZ Knight before, during, and after channeling Ramtha. The results of the academic research project were presented at a conference organized by J. Gordon Melton, Ph.D., Director of the Institute for the Study of American Religion at the University of California, Santa Barbara. The two-day conference in February 1997 was entitled In Search of the Self: The Role of Consciousness in the Construction of Reality. It covered many aspects related to Ramtha and the channeling phenomenon. The complete conference proceedings are available on DVD.

A team of psychologists, led by Stanley Krippner, Ph.D., of Saybrook Institute Graduate School, studied JZ and her school for a year and conducted a battery of psychological and physiological tests. They concluded that the readings taken of JZ’s autonomic nervous system were so dramatic that the scientists categorically ruled out any possibility of conscious fakery, schizophrenia, or multiple personality disorders.

Krippner described himself as extremely skeptical before performing the tests in collaboration with neuroscientist Ian Wickramasekera, Ph.D., a fellow professor at Saybrook. “When we were testing JZ, Ian was quite astonished because the needles on his polygraph that were graphing all of the psychophysiological responses literally jumped from one part of the page to the other part of the page when Ramtha entered the picture. And he had never seen such a dramatic change,” he said.

The team also found that JZ and the students that were tested were found to have a very high hypnotic ability. Krippner explained that was significant because as hypnotic ability goes up, the likelihood of bipolar personality, schizophrenia, and other mental disorders goes down. “You cannot have both,” he said.

According to Wickramasekera, JZ’s heart rate in her normal, resting state was between 85 and 90. When Ramtha took over her body, JZ’s heart rate hit a low of 40 beats per minute and then raced at 180 beats per minute. “You might see this in someone who is jogging or having a serious panic attack, but at the time Ms. Knight was sitting completely still,” he said. “She’s not faking it,” Krippner added, “because when we hooked her up to test her physiological responses, we got results which could not have been manipulated.”